Pondering on the shift from traditional to electronic civil disobedience, the Critical Art Ensemble proclaimed that ‘as far as power is concerned, streets are dead capital.’  Recent events in the Arab world, U.K., U.S., and Europe have reminded us, though, that occupying streets still counts when it comes to different power struggles and social change.

But in some cases web spaces appear as the most obvious and powerful arenas of civil disobedience, as we are seeing now in the in/famous SOPA and PIPA conflict.

The peak of discontent over SOPA/PIPA  will be tomorrow’s web protest that Google, Wikipedia, Boing Boing, The Internet Archive and many other institutions have announced.

While waiting for the protest to take place, it is interesting to recall some of the earlier, more or less know cases of web blackouts.

One of the biggest was the European web boycott held on June 6, 1999 when nearly million users from 15 European countries went offline for 24 hours, calling for the introduction of flat-rate charges, quicker introduction of xDSL, cable modems, and other changes.

High access rates had also been the cause of an Internet strike launched a year earlier in China, when a university student urged Chinese users to boycott the Net for one day, and every Sunday thereafter until Internet costs are lowered and government monopoly decreased.

The same year, a somewhat different type of Internet strike took place in Germany. Workers at the GMD FIRST institute in Berlin, a research centre for computer science, protested the threat of wage cuts by making unreadable 13.5% of each of the GMD web pages.

A web blackout similar in cause to the one scheduled for tomorrow was Yahoo/GeoCities protest held in 1999, when the residents of GeoCities shut down their pages to protest ‘the Yahooligan corporate raid on their members’ intellectual property’.

Different in cause, but analogous in achieving the desired change was an Internet strike organized in Serbia in 2000 to protest an electoral fraud of the Slobodan Milosevic regime.  A disabled high-school student decided to join a widespread street protest the only way he could—by closing down his website—and he called for other Serbian website owners to do the same. Soon after, many educational institutions, sport teams, municipalities, media organizations, as well as individuals replaced the original content of their websites with strike-related materials. 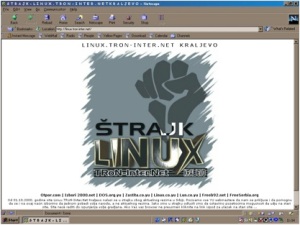 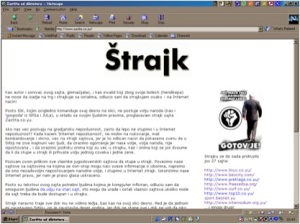 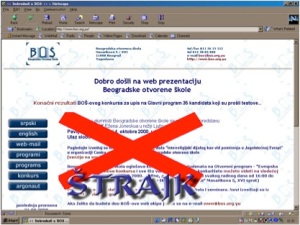 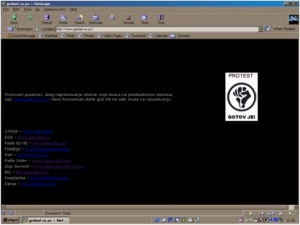 After a week, both streets and websites in Serbia were up and running again, and Milosevic was out of power.